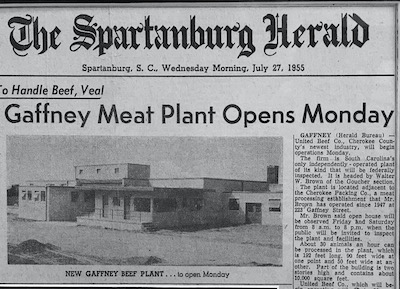 Like most successful businesses, Brown Packing started with little funding, big dreams and a commitment to both hard work and customer service.  Walter Brown was a cotton farmer who began with a few head of cattle in the late 1930s.  The business has changed a lot over the years, but Walter’s industrious spirit, his integrity, and his desire to share his vision with good people is evident in the generation who run the company today.

Mr. Brown started in the meat business in the 1930s, operating out of his home in the Goucher Community of Gaffney, SC.

Walter Brown later did his butchering at the Claude Burgess Slaughterhouse. The City of Gaffney built and operated an abattoir at our current location in 1938.  At first, the city leased the facility to Mr. Brown for $100/month in 1941, but he later purchased the plant and property in March 1943 for $8,245.

The plant was operated by Cherokee Packing Co., Inc. and later, United Beef Company. In 1957, Armour and Company, a leader in the industry, purchased the company, which Walter continued to run until 1975. His son, Gene, was also a key member of the team, learning the business from his father in Gaffney and then managing other Armour facilities across the country.

In October 1977, Brown Packing Co., Inc. was born – or reborn. The former Cherokee Packing Co., Inc. was renamed and reorganized. Gene and his brother, Jim, purchased Spartanburg Abattoir that year and eventually purchased the previously shuttered Gaffney facility from Armour and Company in June 1979. While Armour was downsizing, the two showed the mark of true entrepreneurs with the confidence they could make it as independent businessmen.

Now, although Brown Packing is one of the few relatively small, private meat packing companies in the country, Cattle Buyers Weekly lists the company as one of the top 20 beef packers in the US. Brown Packing serves some of the largest and most respected names in the food industry. Our products are distributed throughout the United States and exported all over the world.

At Brown Packing Co., Inc. we believe running a business requires a delicate balance of stability and flexibility. Our standards remain constant while the methods used to meet and to raise them are the result of deliberate and effective change.

Gene Brown passed away on March 16, 2005, but left an indelible mark on the company that he and Jim founded in October 1977. Gene always said, “I’d like to think that no matter how much our process has changed over the years, we’ve always set ourselves apart with service. It’s something everybody talks about, but to us, it means filling the big orders and the smaller ones with the same care. We’re loyal to our customers, and they’re loyal to us.”

In 2019, the plant underwent a large expansion, nearly doubling in size. The increased workspace allowed for a larger workforce, so we created 200 jobs for the community, making Brown Packing one of the most important employers in the Gaffney area.

The family-run business has expanded successfully by building on Walter Brown's legacy. Today, Jim Brown is the President of Brown Packing; Gene's sons, Reed and David, are Vice Presidents; and Gene's son-in-law, Sloan Bradford, is the Purchasing Director. Reed, David and Jim's children, Nathan, Zachary and Caroline, have committed to proudly carrying on their family's tradition in the meat industry.

As we grow as a business, serve more national brands, and employ and serve our community, the Brown family continues our commitment to quality in every aspect of the work we do.